Our students are the reason SSASS exists! Our focus is to help individuals of all capabilities enjoy snow sports at Silver Star Mountain Resort. Here are a few stories of our amazing students... 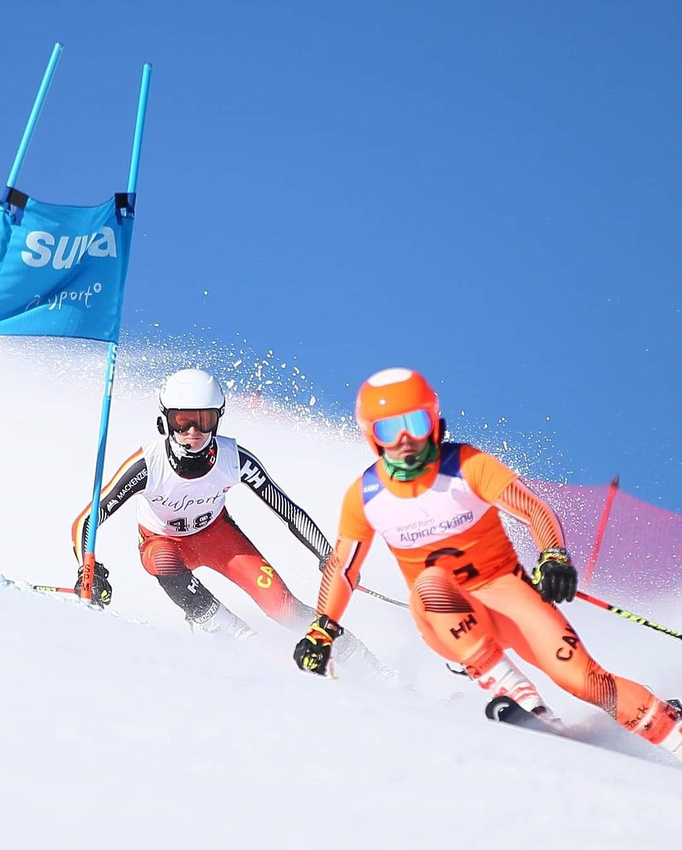 After an intense 9 days at the Paralympic Games in Beijing, Logan is home in Lumby, enjoying a well-deserved rest and change of pace.  He plans to continue work on his tiny house and to restart his beehives.  Dry land (ski) training will begin in a couple months at Whistler. There are plans for on-the-snow training in Chile during the summer and then in Europe before ski season resumes in Canada.

During a recent visit to his home, the only clue that he was involved with skiing was a single ski leaning against the counter in his tiny house. It’s the ski that popped off his boot during a run down the Giant Slalom course at the Paralympics, resulting in a fall and disqualification.  “That was my best run” said Logan with no hint of disappointment.  It was his second last race and most of the jitters were gone.  “It’s better to do your best and crash than to take it easy.”

At 19 Logan was the youngest member of the full Canadian Paralympic Team of 49 athletes.  He reports the experience as “amazing”.  He explains that visually Impaired (VI) Alpine Skiing is a partnership of 2 athletes with intense communication and trust and is deeply appreciative of his guide Julien Petit who has shared his skiing experience for the last 3 years.

Logan described the meticulous protocols and testing that kept the whole team Covid –free.  They remained in their own Alpine Ski Team bubble for transportation, meals and housing, being whisked from the Beijing airport, two hours away, to stay near the ski hill where the competitions took place.  Because of the Covid restrictions, there was no touring.  “They told us the Great Wall of China was just over the next row of hills but we never saw it”.

“Everything was done for us, we were there to ski.” After three days to acclimatize and practice, the race events began.  Before an event each VI skier and guide would have about 20 minutes to inspect a new course before they raced.

The Chinese worked hard to maintain the amount and quality of snow on the courses during very warm conditions. The area is typically very dry and sandstorms were a concern.  Maintenance workers used leaf blowers to remove sand from the snow.

The first event was the Downhill, the fastest of all the alpine ski events.  Logan admits he was nervous.  He and Julien came in a very respectable 9th place, with an average clocked speed of 96 km/hr.

The following day they placed 7th in the Super G (a speed event combining elements of downhill and giant slalom).  Day three was the Combined Super (two runs, Super G and Slalom) where they finished in 5th place.

Their fourth event was the Giant Slalom (2 runs on a long fast slalom course).  After the first run they were in 8th place.  On the second run Logan went all out.  Unfortunately his binding released resulting in a crash and disqualification.  The next day was the final race, the Slalom (2 runs).  They finished in 6th place.

Logan emphatically admits that all the training and hard work was worth it.  He is more motivated than ever.  “In four years’ time I want to be on the Podium”.

Judging from his track record and attitude, it’s very likely we will be cheering for him during the Paralympic Games in Milan Italy in 2026!

I’m grateful for my experience with the SSASS program after suddenly losing my vision on December 17, 2021.  I thought I would never ski again but fortunately I was able to contact SSASS and join the program late.  On my first lesson, I was scared because I was told that I could possibly have vertigo due to my loss of vision.  Fortunately, that did not happen and it was like riding a bike, as one would say.  I enjoyed my sessions with SSASS and even reached my goal in a few short weeks.  I have been out skiing on my own and the incredible feeling of having some kind of independence in a time where almost all of my independence has been stripped away from me made me feel so grateful.  This is such an awesome program and I want to thank all the instructors and everyone who helped me get there.  Thank you so much!   Cori 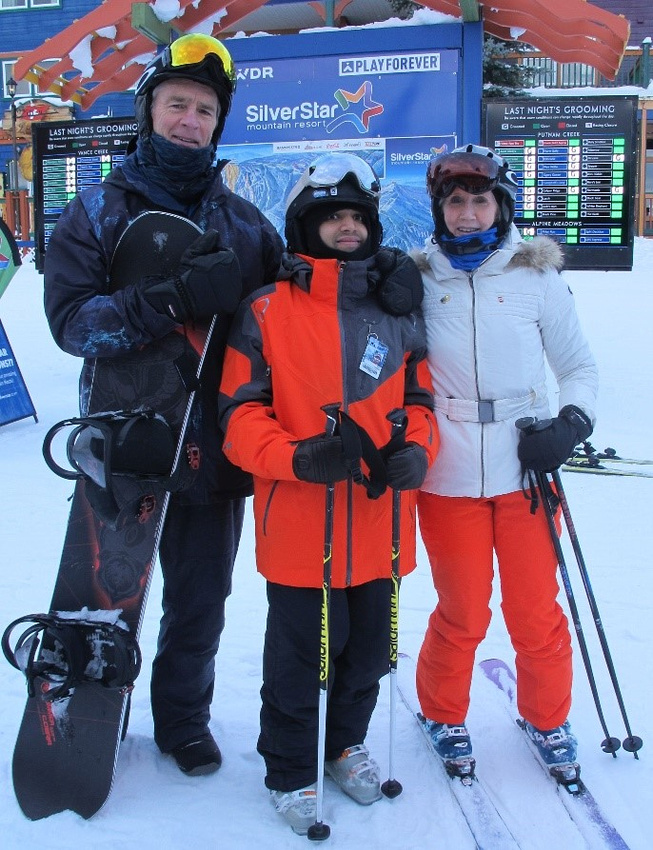 Driving up the Silver Star Road out of Vernon and passing Butcher Boys always brings a smile to my face and a sigh of relief. It feels like we are home even though we live thousands of miles away in Ireland. When we left here in February 2020 we were already planning what we would do here the following year never realising that the world would be locked down for almost two years. But time flies even in a pandemic as I try to remember the 22 years we have been coming to Silver Star Mountain Resort.

It all began in 2000 when our family of 4 children and 2 adults visited Silver Star for the first time. We had travelled all the way from Saudi Arabia on the recommendation of some Canadian colleagues and friends; "Go to Silver Star if you want some great skiing" was their unanimous choice of all the skiing resorts in North America. How could we ignore such a positive recommendation? Arriving into Kelowna Airport, we didn't know what to expect in this far flung corner of Canada, but we had a good feeling as we drove up the Okanagan valley past the ice covered lakes and the lake-side farmhouses proudly displaying their Canadian flags.

Our three older kids quickly settled into their respective ski school groups and were soon at home skiing on the hill and eating lunchtime hotdogs in the Town Hall Eatery. It was a different story unfortunately for our youngest, aged 6. Niall was autistic and after a week in the regular ski school he was still on the magic carpet, skiing down to the bottom of the wee slope, falling over, and lying there eating snow until someone picked him up again. The instructors just didn't know how to relate or respond to his special needs. We were despondent until someone told us about SSASS and met up with Andy Mather, one of the founding members. We had a chat with him about Niall's special needs and he agreed that Niall could join their programme. Within days Niall was skiing down the slopes on a harness following an instructor, with a second instructor controlling his speed and direction. It was a spectacular transformation and SSASS is one of the reasons why we have been coming to Silver Star every winter for the last 22 years!

The SSASS programmes are run by a group of dedicated, talented, enthusiastic and friendly volunteers, who are simply motivated by their love of skiing and their desire to help disabled children and adults experience the thrill of snow sports.

In our case, Niall was their first student with a cognitive disability. Andy and his team had to work out a way of getting Niall to ski with his limited ability to communicate and comprehend. The instructors worked out that Niall would mimic the movements of someone skiing in front, while an instructor behind could control his speed and direction with a harness. It worked, and by the end of the week Niall was happily skiing down green runs and the odd blue.

Fast forward 22 years and Niall is 27 years old and loves coming to Silver Star to ski. He is now able to go skiing with a single instructor and can ski all but the most challenging slopes at his own pace. He loves skiing through the trees and has no problems with bumps. He still has a lot to learn and each time he goes skiing with SSASS the instructor works with Niall to improve some aspect of his skiing. This interaction is also great for Niall as he has limited opportunities to meet new people outside his family. He enjoys telling jokes, singing songs and having fun with all of the instructors. There have been so many instructors over the years and I would like to give a very special thanks to every one of them.  A special thanks also to Sandie, the SSASS Out of Town Coordinator, for organising the ski sessions for Niall this year under such challenging conditions. And one last big word of thanks to Andy for teaching Niall to ski all those years ago.